Pieter du Toit: In defence of the Springboks, rugby and the Bomb Squad

The manufactured furore over the weekend about Springbok winger Makazole Mapimpi being waved away by a group of reserve players is unnecessary and those fanning the flames of racism are uninformed about the traditions, culture and conventions of rugby. This Springbok team might not win the World Cup, but they certainly aren't a bunch of racists, argues Pieter du Toit.

Rugby and the Springboks, like most things in this accursed country of ours, have a contested and complicated history and legacy.

It was brought to these shores by the British colonisers as part of the Empire's grand attempt at anglicising the local population and to spread the gospel of European civilisation. Sport, along with language, was the most potent weapon in subduing and assimilating those hostile to the grand project of subjugation.

In South Africa rugby became the province of the Boers, who after having been defeated in the "white man's war" of 1899 to 1902, saw the sport as a way of getting back at the colonisers, of physically dominating the British who were the undisputed rulers of white South Africa.

Makazole Mapimpi leads the @Springboks in a song ahead of the session at the Kobelco Steelers' training ground. pic.twitter.com/KnjQRV6HlH

And during the rise and subsequent dominance of Afrikaner nationalism, rugby became symbolic of Afrikaner prowess, with the all-white Springboks ruling the sport for the first half of the previous century, only losing its first test series in 1956 against the All Blacks in New Zealand. By that time the National Party had been in power for eight years and its government's policy of apartheid was firmly entrenched.

Parallel to the Springboks and official and organised rugby there was a whole other world in which black and coloured rugby was just as popular and big as white rugby. In the Eastern Cape, where missionary schools were the dominant feature on the educational landscape, rugby among black people flourished, and generations of youngsters grew up with the oval, rather than the round, pig's bladder. And in the Western Cape coloured people, also relegated to the sidelines of society, were forced to establish and create their own teams, culture and legends.

Makazole Mapimpi about yesterday. They are called the bomb squad and they have their own thing going on. #Springboks #Mapimpi pic.twitter.com/6afbkV7PtM

When unification in the sport was achieved in 1992, with the white, black and coloured unions coming together to form a single administrative body, it led to years of strife and political controversy. The sport, dominated by old school, Old Testament and old Afrikaners, took time to adapt to new realities and controversies like Andre Markgraaff, who used the k-word while he was Bok coach, caused enormous damage to the sport.

But the reality of the game in 2019 is light years removed from the early days in the 1990s and the first decade of this century. The culture in and around the team has changed and the Springboks, given the limitations in the feeder system, are arguably the most racially transformed and universally embraced team of any national team in the country. 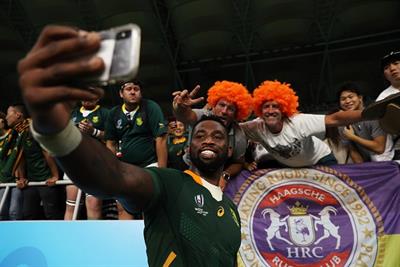 Rassie Erasmus, the coach, isn't only one of the most astute rugby brains in South Africa but has an acute awareness of the complexity of society, the history of the sport and the Springboks as well as the fragility of racial dynamics.

He has over the past two years transformed the Boks from chumps to champs with a number of black rugby players bristling with talent, biceps and attitude, establishing themselves as regulars in the team. He has entrusted the captaincy to Siyamthanda Kolisi, who follows in the footsteps of ambassadors such as John Smit and Francois Pienaar, who understood that captaining the national rugby team isn't only about making the lineout calls, but also about traversing history, society, vested interests and future expectations.

The furore about macro-wing Makazole Mapimpi apparently being shooed away by a group of white players after last week's win against Italy therefore is deeply saddening, given the road the sport has travelled.

The team, the sport and the players were attacked as being racist to a black player, even after Mapimpi explained the context of events on his Twitter account. Context, team dynamics, team culture, the sport's traditions … nothing could sway those who wanted to attack the sport and the team. Mapimpi, who weighs in at 90kg and has scored 11 tries in 11 matches, was even told what to think by the thought police on social media. #Mapimpi I recorded the whole saga, this is too painful pic.twitter.com/LRQ6AzaB8B

This Springbok team, whether it wins the Rugby World Cup or not, has shown what a group of South Africans can achieve when it works together, black and white. It can give hope and pride.

It's a team where the heroes are called Makzole, Herschel and Frans. Exactly how it should be.